Mark Goyette emailed me in 2012: “I believe the car you own may be the first Hathaway built after the prototype. This car was sold to Chuck Hunter along with the molds and tooling.” Chuck Hunter drove my car and called it a Hunter. After he died, it was sold to Bruce C. Reeves. He drove it for about 5 years: "My most notable trip was down the coast to Santa Cruz, Monterey, Carmel and Big Sur. It was an amazing drive with the ocean and redwood trees.  In typical fashion, the generator went out in Monterey, about 150 miles from home. I had to find a place where I could buy a new generator and had to install it in the parking lot of the store by myself. That certainly impressed my girl friend. " In 2001 my car was imported in the Netherlands and bought by Ed van de Beek. I drive her since October 8, 2011.

This Hathaway was photographed in the early 1980's at a car show in Cincinatti Ohio.
The  other picture is taken at the Knott's Berry Farm Kit Car Show and published in the Kit Car Illustrated in 1987.  Also five pictures of the car on eBay in 2016.  In 2018 the Hathaway was on eBay again.

This red one has Hathaway logos on both sides of the motor cover.  The TR6´s commission number is CF 14937-U. It was for sale in Red Deer, Alberta (Canada)o and on eBay in 2001.
In 2020 the registrar of the TR Register Spain Club wrote me that it is in Las Palmas de Gran Canaria nowadays. See the pictures with Spanish plate.

Bought in 1982 as a kit by Natt and Susan from Pennsylvania.  Natt wrote me: “I purchased my Hathaway as a kit directly from Mark Goyette in the fall of 1982. On Sept. 24, 1982 I sent him a deposit on the car and we agreed to meet at the Hershey Car Show in October 1982 to finalize details on the kit, mainly upholstery and carpets. I got the impression from Mark that my car would be the last one he would be making. On Jan. 5, 1983 I took final delivery of the kit, and paid the remainder of the bill, at a trucking company in West Chester, Pennsylvania.”

"This is a picture of a board from the crate in which my car body was shipped to me back in 1983. As you can see it has the return address of the Hathaway Company on it."

“Restoring the chassis wasn’t as difficult as it was time consuming. Some of the parts were difficult to get back in 1983. I used a TR4 chasis, engine, transmission, and running gear.

I received two Hathaway logos with my kit. I installed one of them on the horn button. I don’t think the Hathaway Assembly Guide indicates where to install them, but I have seen them installed on the grille in various magazines."

In the summer of 2012 Natt finished the restoration of his Hathaway. Later that year Natt and Susan took her to the British Car Show Delaware City and won Best in Show.

Chuck Hunter bought the design, molds etc and started his firm in the fall of 1983. After his sudden death in 1984 his wife Lisa sold the firm  around 1987 . Click here for the Hunter Assembly Guide.

Back in 2012 I visited Kurt and Marietta i n Switserland. We had a wonderful trip in his beautiful roadster wich was in a very good condition. Kurt told me: “About 1994 I visited a car dealer, because I was interested in English cars. There I saw this beautiful car he had imported from California. I had never seen this type before. Nobody could tell me what car it was. I went to gatherings of English cars. People would come to my car, even laid on the ground to look underneath, but no-one ever knew what it was. Then I saw a small black & white picture in a magazine advertisment from Hunter Roadster, and the puzzle was solved."

This Hunter was purchased as a kit around 1986, the first owner died before he could complete it. Sold  in 2001 on eBay from Pennsylvania to LA. This second owner (I don’t know who it is) once owned the domain name ww.hathawayhunter.com. See the pictures. Whereabouts unknown to me. Based on a TR6.

Kit produced by Chuck Hunter who died in 1984 while this car was under construction. The first owner finished it in 1986. It is based on a TR6 (CC30288L) from 1969. The car was on eBay in 2002 and was sold to Florida. The second owner stocked it away. Then Jamie Palmer became the third owner in 2012. He had been searching for a Hathaway or a Hunter for almost 29 years.

Paul Q. bought the Hunter as a kit from Lisa at VMW in 1984. The car is titled as a 1968 TR250 and the mechanicals are completed. The pictures were made in 2006 and the kit then just needed the final bolt-up.

Hugh bought HaWy No5 in 2008 and is the third owner.
Although it says HAWY No5 on the front license plate, Hugh was told by the widow of Bob D. (the second owner) that it is the 5th car built by Chuck Hunter.

Hugh wrote me: "With the car came a file with a brochure and price sheets from the Hathaway Motor Company addressed to Rick L. in Bloomington, CA. I'm pretty sure Bob bought the car as you see it with exception of the mirrors, front plate and chrome wire wheels. I don't know whether it was factory built or a kit but I suspect it was a kit. Is it a Hathaway or Hathaway-Hunter? I don't know, but I believe Bob thought it to be a Hunter."

John Argue bought the kit June 28, 1984 from VMW. He died before being able to put it together. Then it was sold to someone who sold it for 8,000 dollar tot Jim Soha. Thomas Wiegand bought the kit. In the picture you can see how it arrived in Germany in May 2006. He sold it February 2012 to Justin Mercier from Rhode Island. Justin already restored a TR6 chasis. (I like the yellow blanket. You can see in the pictures that is was used to pack the kit when it arrived in Germany. And Thomas used it when he shipped the kit to Justin. I like to imagine that Chuck already used it back in 1984.) 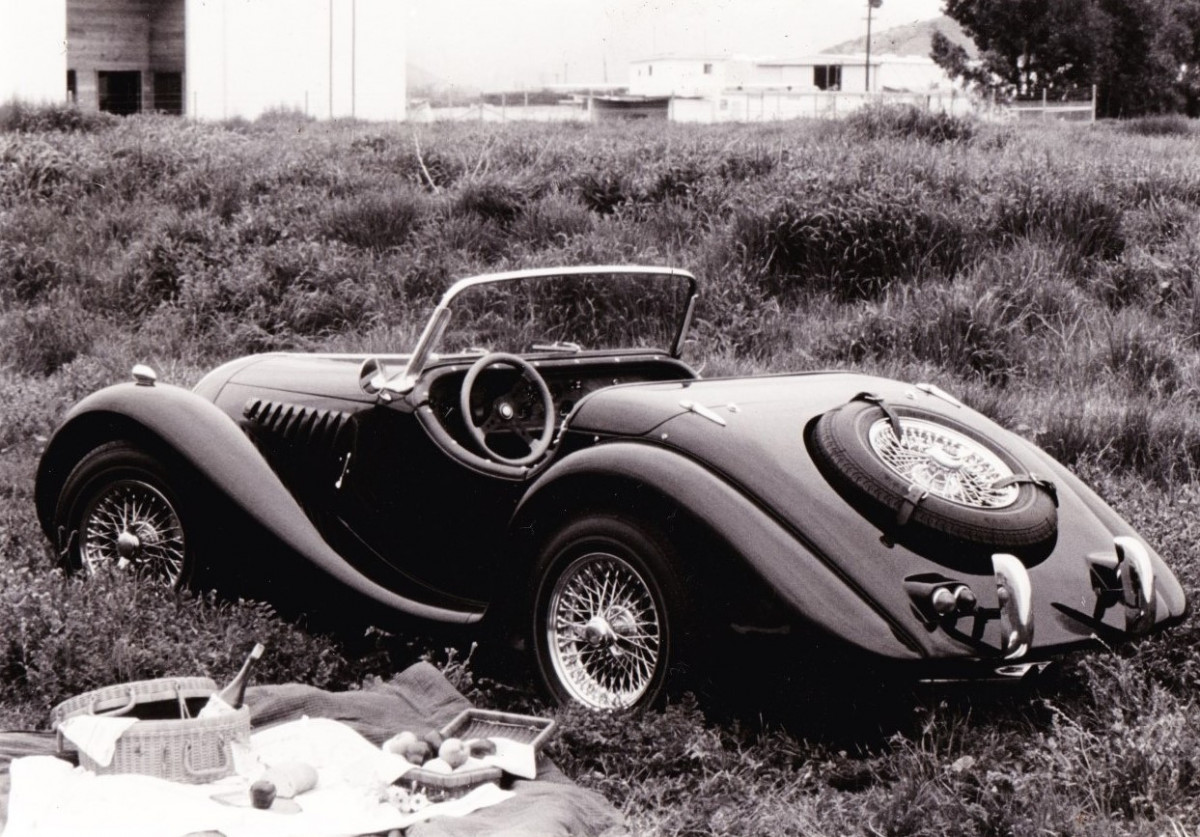 Patrick MacAuley wrote me the story behind this picture: “This picture  is of the only Hunter that was produced by this group which owned Tripos and VMW after Chuck Hunter. They "had enough parts to make one car", which was probably an unsold kit and some miscellaneous parts. This black-and-white picture was taken behind their shop in California. The picture was made from a flipped-over negative to make it look like a Right-Hand-Drive, and was used as part of a sales effort in England."

Jan de Buyser from Belgium bought the molds in California in 1987 or 1988 from the estate of Chuck Hunter.  In 1996 Jan sold the molds and his car to Thomas Wiegand and Marcel Christ in Germany.

Jan de Buyser built this De Buyser Roadster on a TR250 with overdrive for himself: “Driving such a beautiful car in these beautiful mountains of Switerland. The feeling is so great, I can’t describe it.”

In 1996 Jan sold the molds and his car to Thomas Wiegand and Marcel Christ in Germany.
In 2001 Wiegand sold this car to someone in the region of Berlin.

Around  1999 Danny from Belgium bought  a body from Jan de Buyser. He is stil working on it.

Thomas Wiegand from Germany bought the molds in 1996 and sold them in August 2012 to David Alcraft. Wiegand made 1 car and produced 5 kits.

The car in the logo is HaWy No5.

This green car with Brookland half screens belonged to Marcel Christ and is based on a TR6. Thomas Wiegand and Marcel Christ started in 2000 and the car was finished by the two of them in 2003. Marcel sold the car to Thomas in 2012.

Two basic kits were sold to NG Cars in England in 2008. Both kits were bought by David Alcraft in 2012.

This kit was sold to a Triumph restoration specialist in the northern part of Germay who almost finished it around 2010, so Thomas Wiegand emailed me.

This body was made in 2006. Wiegand sold it in February 2012 to Patrick MacAuley in Virginia, USA.

Thomas Wiegand put the molds on sale in 2011. David Alcraft from the Uk bought them in 2012. He is still working on this beautifull roadster.